HISTORY OF THE TEMPLE 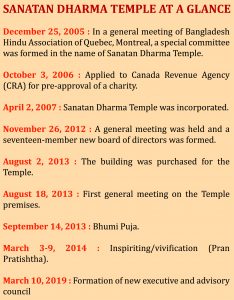 In a general meeting of the Bangladesh Hindu-Association of Quebec, Montreal on December 25, 2005, a special committee was formed to establish a temple for the worship of God by the followers of Sanatan Dharma (Hinuism). Later the committee decided to incorporate a not-for-profit corporation for the purpose and named it as ‘SANATAN DHARMA TEMPLE – LE TEMPLE DE SANATAN RELIGION’. It was incorporated on April 2, 2007. On August 2, 2013, a building was purchased at 6219-6225 Boul Monk, Montreal, Quebec to house the Temple with the generous contributions from the members of the Temple. The grand inauguration of the Temple was done on March 9, 2014 with the ceremonious celebration of the vivification(pran pratishtha) of the images/idols of the deities.

1. To advance religion by maintaining and supporting a house of worship with services conducted in accordance with the tenets and doctrines of Sanatan Dharma hindu faith and culture.

2. To preach and advance the teachings of the Sanatan Dharma Hindu faith and the religious tenets, doctrines, observances and culture associated with that faith.

3. To do all such things as are incidental or ancillary to the attainment of the above objects. 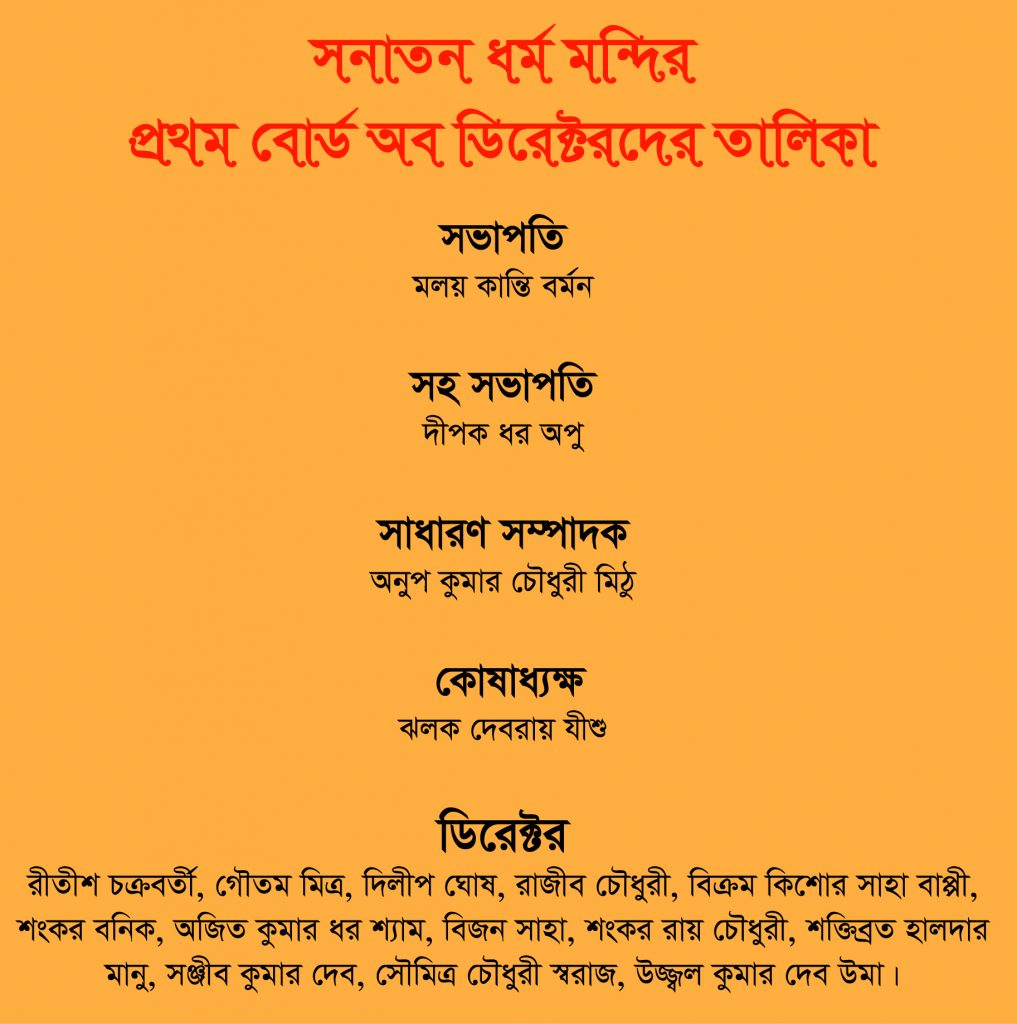 1. Daily Puja (worship of deities) is being held by the priest.

2. Weekly Puja is being held on every Sunday by the priest.

3. Monthly Satya Narayan Puja (worship of God) is being arranged on first Saturday of every month generally.

4. Religious instructions are being provided to the children of the Hindu community by the religious leaders and the priest.

5. Religious and spiritual discussion sessions for the members of the Hindu community are being conducted by the religious gurus and experts from inside and outside of Canada from time to time.

7. Different groups in the Hindu community, who are the disciples/followers of the different gurus such as Ram Thakur, Ramkrishna Paramhansha Dev, Baba Loknath, Thakur Anukul Chandra, Prabhu Jagatbandhu, Swami Prabhupad and any other guru are organizing separate religious functions in honour of their gurus on different occasions.

8. Other religious activities such as the solemnizing of marriage ceremonies, Annaprasan (the first day of rice eating) for the children, birthday ceremonies, anniversaries, after-death rituals and some other religious and cultural functions are being held regularly.

9. All those activities are being followed by Prasadam (holy food) at the dining hall of the Temple.